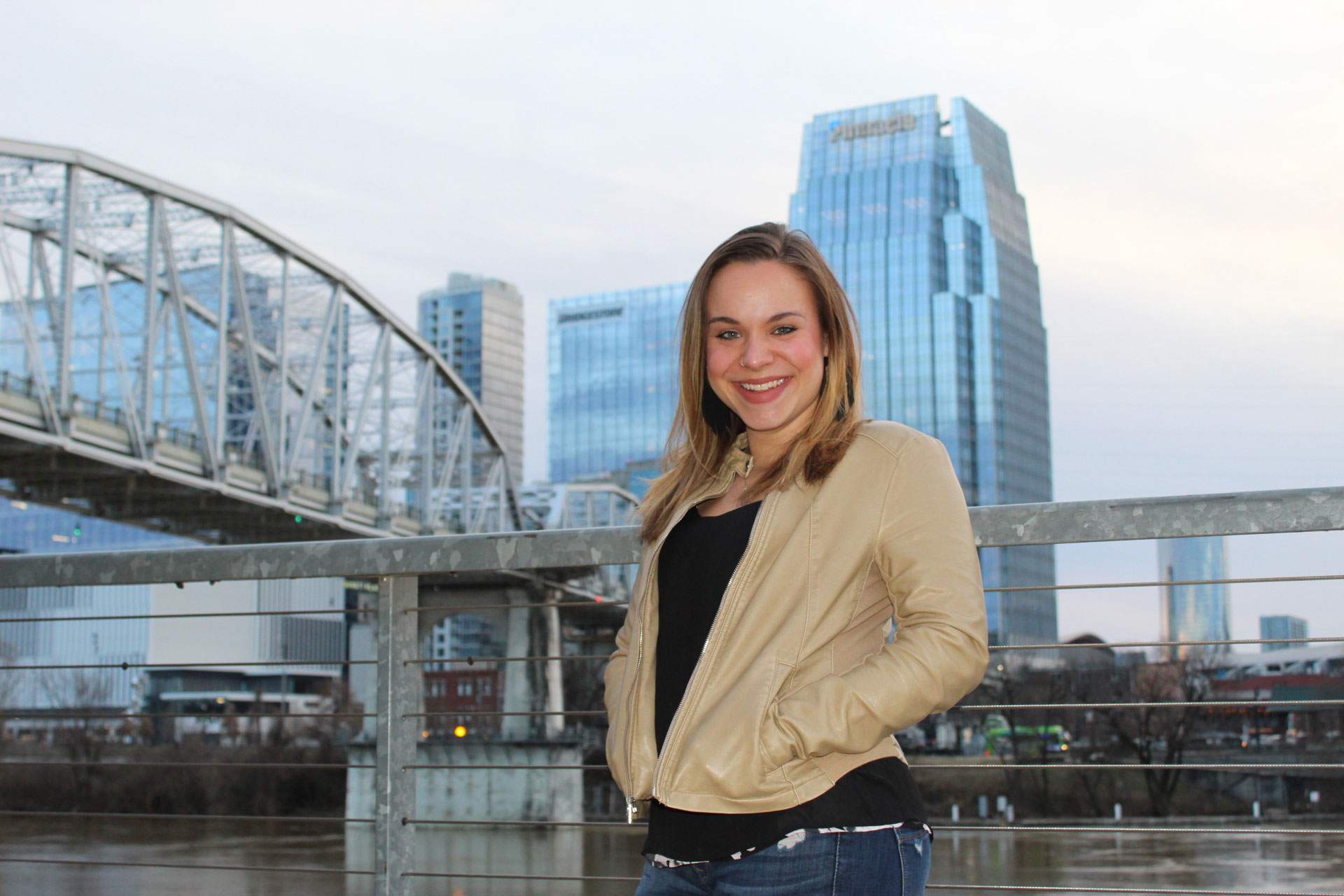 Last night I tried to write a blog post on dating. To say it didn’t go well is an understatement. Took me 4 hours to (not) finish, then when I went back to re-read it, I realized it only consisted of me going on a bitter rant and turning alllll the sarcasm levels up. So I gave up, started sulking, and went to bed at a ridiculously

early hour. Now that I’m rested and hopefully have gotten most of the sarcasm out of my system, I think it’s best I try again. This time being more focused on honesty rather than sounding like I have my crap together and am impervious to feeling emotional pain. Buckle up, dear reader…

The reality is, dating is hard. I think it’s hard for most of humanity. Sure, you’ve got those people who look and act super confident when it comes to relationships. Maybe “putting themselves out there” comes easier to them, and they look and act way more smooth than I do. Wouldn’t be difficult. Some people just seemed to have been born with a natural knack to appear confident and flirty. I, on the other hand, seem to have been born with a knack for social awkwardness and not being able to read any sign of flirting at all. No joke. And if you saw me try to flirt…let’s just say it doesn’t usually end well. (Listen, I said I got most of my sarcasm out.)

But, I think every single person, no matter what they look like or how often they date, still struggles with it to some extent. They may not show it outwardly, but I refuse to believe it all looks as perfect as they project. At the end of the day, we’re all human. We have different personalities and different habits. Maybe I’m speaking out of turn, but I think generally, most all of us want the same thing: to find someone who knows all the facets of our personality, and who still wants to be with us regardless of our imperfections.

I think one of the hardest factors in today’s dating world is you have to wade through some pretty superficial crap before you can get to the real stuff. Like, dating apps? What? Swiping right or left based SOLELY on if you’re attracted to someone. Not even the person themselves, just a few strategically placed pictures and maybe a few words about them. Not to mention, how little accountability you have for someone else’s feelings. Someone messages you and you don’t like what they say, or maybe you’re not in a good mood in the very moment you read it. No problem, just ignore it. You’re under no obligation to say anything at all to them, and chances are you’ll have zero repercussions. They may be left wondering what they said wrong to make you stop the conversation, while in reality it has nothing to do with them… and you don’t even have to EXPLAIN yourself. I say this not to judge you if you’ve used dating apps and have done this. So have I. I’m just admitting to the ridiculousness of it all, once you boil it all down.

For me personally, I have a hard time getting out of my own head. I’m not naturally a person that trusts very easily. Some of that has to do with previous experience, some of it is listening too often to the voice in my head that tells me to protect my heart against all costs, and some of it is just plain stubbornness. Regardless, I’ve never found it easy to tell someone how I feel in a romantic sense. Heck, despite what it seems like on this blog, I do not spend a lot of time talking about my emotions. At all. For a long time, I blamed that on my leg and my lack of confidence. I assumed men wouldn’t find me attractive. And yes, I still struggle with that sometimes, but my confidence level has grown exponentially in the last 5 years. So what about now? I know who I am, where I come from, and who I don’t want to be. Where I struggle sometimes is believing that there is a man out there who will look at me and consciously choose to be with me over some other confident girl.

So, is there really a difference between dating with all limbs fully intact, or dating when you’re missing a leg? On a pretty surface, shallow level: sure there is. Living in a generation that uses dating apps, living in a city of physically beautiful people (For real, Nashville, it’s ridiculous. Some of you can tone it down a bit.), working at a gym where you meet a lot of people who are especially physically-focused…it’s intimidating as heck. You don’t even have to have those life factors to be intimidated. I don’t want to speak for all people who are missing a limb, but as confident as I am, I still have plenty of moments when I’m extremely self-conscious about my body. Allowing someone into your life who not only gets to know you and your idiosyncrasies, but then also allowing them to see your residual limb and how vulnerable you are without your prosthesis…DANG. It ain’t easy, people. That part of myself I can never change. I can workout all the time. I can have perfect skin. I can have defined arms and washboard abs. I cannot do anything to change the fact that I’m missing a leg. I have to take my leg off to get in the water. My residual limb gets really bad blisters and pain if I do too much activity and don’t take care of it properly. Pool parties are terrifying to me on multiple levels. You think I wanna share that stuff with a man, not to mention a man I’m physically attracted to? (Meanwhile, I post it for ALL to read and know on the Internet…yes, I see the irony.)

Anyway, so yeah, dating with a missing limb can be more difficult. But to look at the reverse side, sometimes it makes things easier. In a lot of situations, having one leg sets up an automatic filter for douchebags (pardon my French). If a guy is looking for one thing alone (please don’t make me spell it out for you, my mother will read this), then he’s probably not gonna waste time with me. Call me uptight, a prude, a grandma, or call me naive – I really don’t care. I know my worth, and it’s for sure as HECK more than a one-night stand. If a guy is only interested in the physical, that’s just fine. We just ain’t gonna vibe.

Sometimes, I use the excuse of my leg as a crutch. I mean, am I really going to be so arrogant as to say I have a reason for dating to be difficult because I’m missing my right leg, so it should be easier for everyone else? Heck to the no. That’s just not fair. My guess is I have the same (at least, very similar) root fears as the guy I workout next to at the gym, or as the girl who makes my Starbucks order. We all want to be known and not rejected. I want someone who will see me for who I really am, not just who I project to be, and still wanna stick around. That’s hard based on the simple fact that all relationships involve humans, and humans are flawed. We make mistakes, we hurt people, and we can cause permanent emotional damage. Those things have nothing to do with my prosthesis. If I’m gonna be super honest, I’d say my greater fear is probably that someone would reject me and it has absolutely nothing to do with my prothesis. I wouldn’t even be able to call him shallow or use my prosthesis as an excuse.

So I suppose I’ve succeeded in being honest with this post. It’s somewhat terrifying. Let me clarify, I didn’t write any of this so people would reach out to me to build me up and give me a false sense of confidence. I can be shallow, but I ain’t that bad. I just wanted to be brutally honest, because I don’t think people do enough of that, and it leaves people like me feeling very left out and alone. I look around and wonder if I’m one of the few that seemed to miss the secret to dating with ease.

Like with any subject I write about, I’m still figuring it all out. This blog process is more about self-reflection than anything. If you found it helpful, wonderful. If you read it and now think I’m a psycho, my bad, but we probs’ wouldn’t get along anyway. Regardless, know that whether or not you use a prosthesis, confidence has nothing to do with your body. It has nothing to do with working out. A wise friend once told me, “It doesn’t really matter how a date goes or what the person thinks of you. If you can look in the mirror before the date starts and be confident in who you are alone, then having them like you by the end of it is just a plus. If not, no worries, because you were doing just fine without them too.”

So, whether or not you’re in the “dating game,” I challenge you to be confident and to love yourself. Yes, love other people and continue to put yourself out there. You should. That’s typically a good thing. But know that your worth isn’t centered around the compliments you receive from other people, or how many free drinks you get from someone trying to hit on you at a bar. Confidence comes from knowing and embracing who you are, looks aside. When you learn to love that, you don’t have to be quite so afraid to show other people. 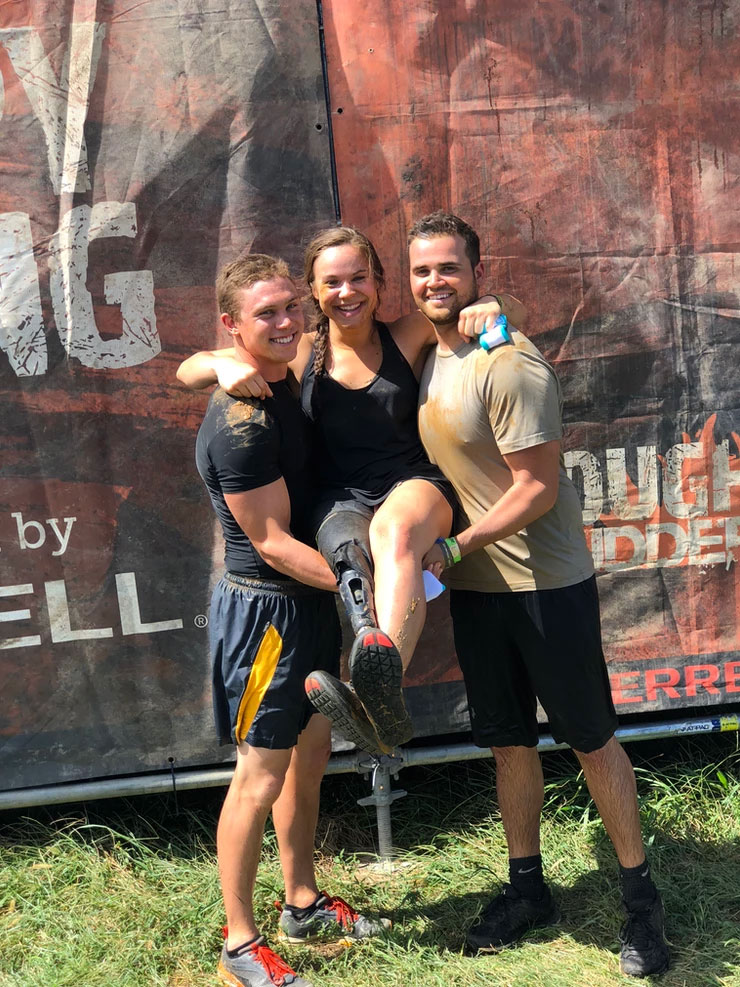 I’m 26 and Played in the Mud this Weekend. 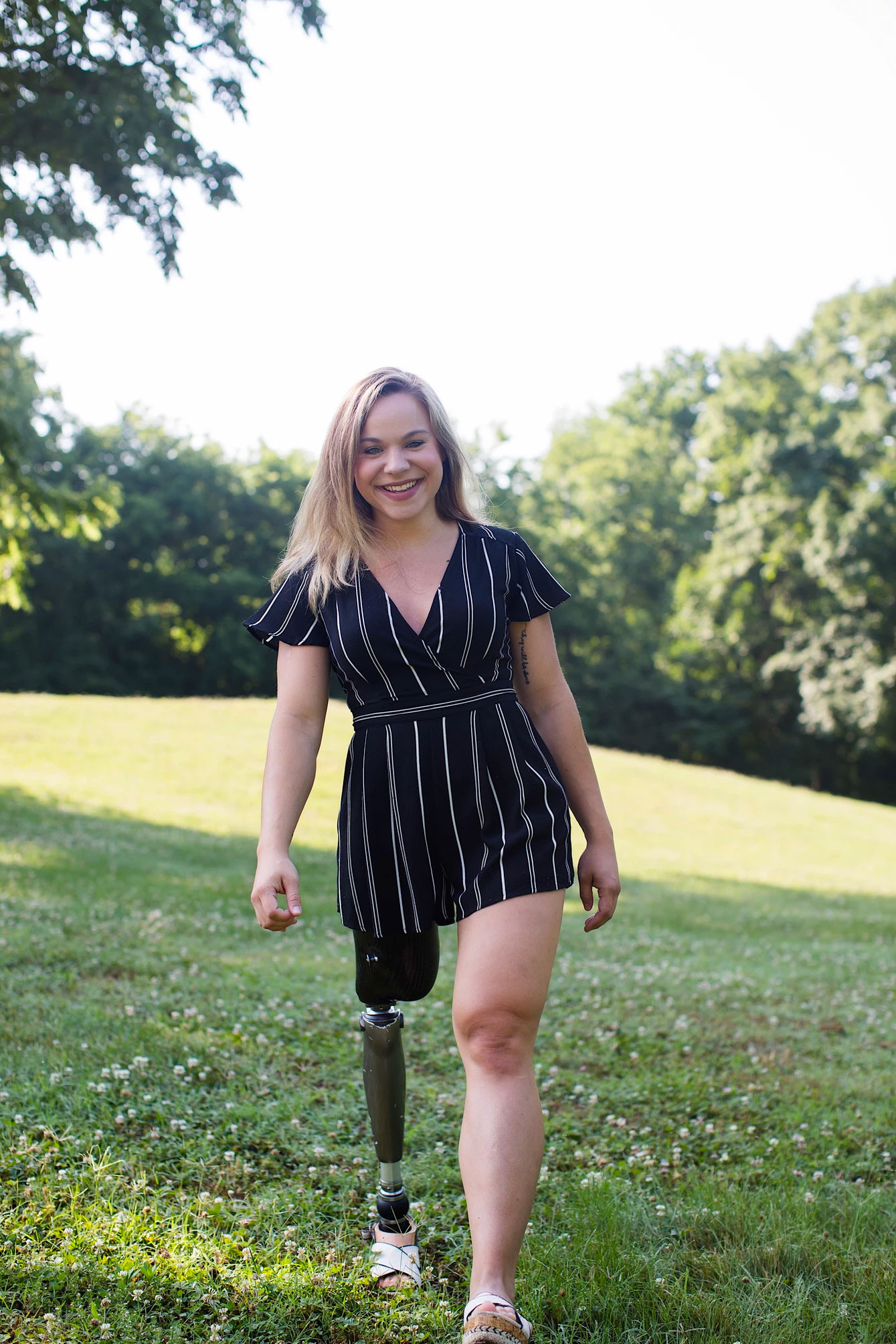 Why has it taken me so long to try to run? 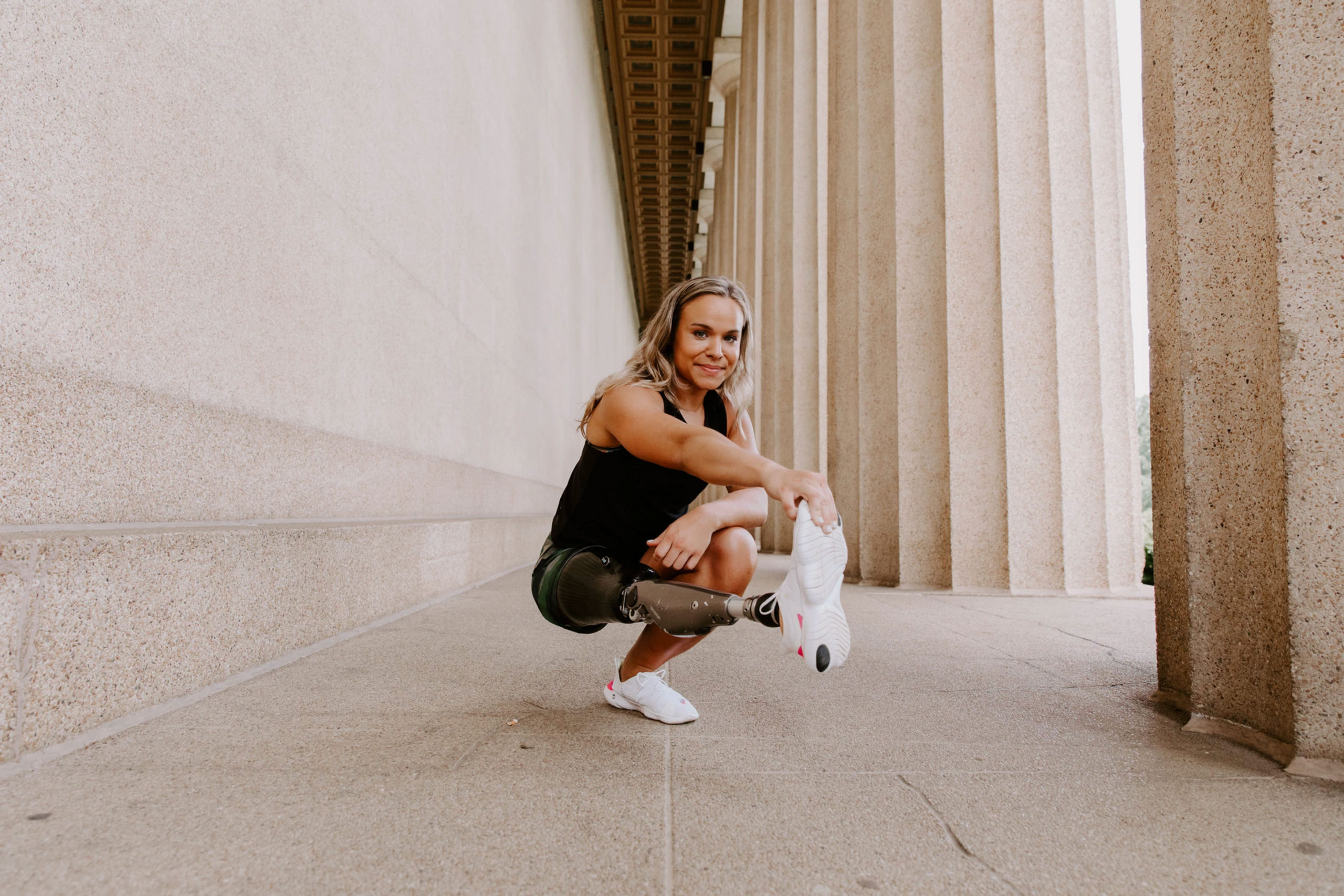 I have things to say again.

Enter your info and we’ll send you updates!